ALUMNI STORIES: 'I COMPLETED MY DEGREE WHILE ON CHEMO' 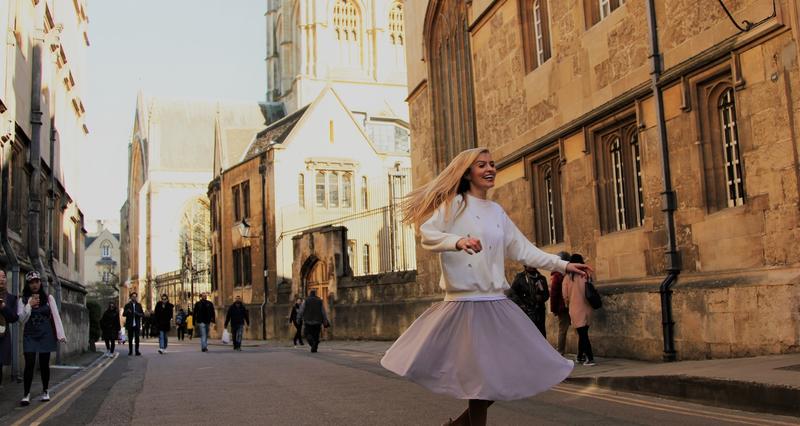 ALUMNI STORIES: 'I COMPLETED MY DEGREE WHILE ON CHEMO'

Tilly Rose (Jesus, 2011) on studying at Oxford whilst battling health issues, plus launching That Oxford Girl

We spoke to alumna Tilly Rose about her experience of applying to Oxford University, her time studying here whilst battling ongoing health difficulties, and her life as a blogger, social media influencer, and founder of That Oxford Girl since graduating.

So Tilly, what made you decide to apply to Oxford University?

I first visited Oxford on a day out with my family when I was ten years old. Whilst in the city, we stumbled across a sign outside Balliol College, inviting the public to look around. As I walked into the quad in Balliol, I was in awe of what I saw. It was at that very moment that I decided that I was going to Oxford University.

However, the following year I became seriously ill and from that point onward I hardly went to school - I was regularly admitted to hospital with bouts of pneumonia and underwent major abdominal surgery. I was at a state school and told not to bother taking my GCSEs and, definitely not to bother applying to university, let alone to Oxford. But with my health being so far beyond my control, studying became my unwavering focus. I taught myself, from hospital and home and, much to my school’s amazement, was later offered a place to read English Literature and Language at Jesus College. 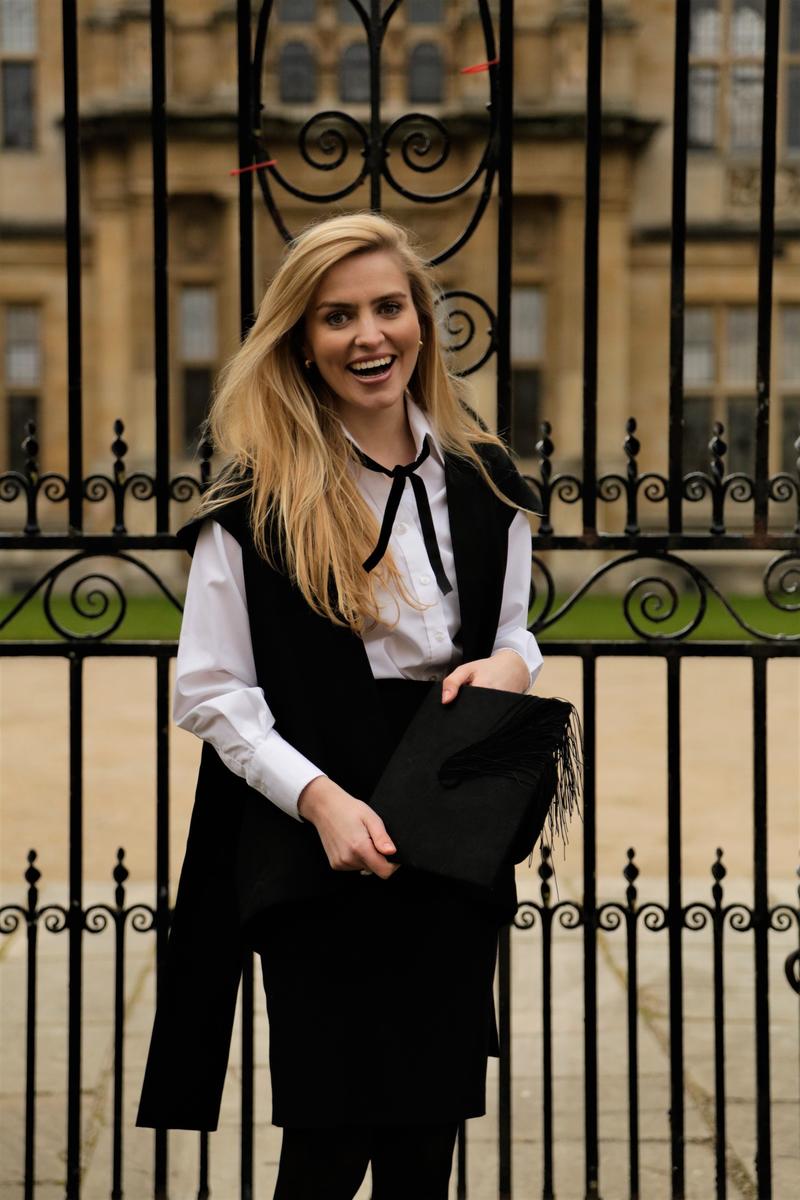 Did your health continue to affect you whilst you were studying at Oxford?

In my second year things hit rock bottom for me. I was admitted to hospital with yet another bout of pneumonia and was forced to take 6 weeks off (out of an 8 week Oxford term). By this point I had been to over 15 hospitals, seen over 30 consultants and been told that every possible test had been done. The doctors had stopped looking for the cause of my illness.

I’d given up hope, but later that year a diagnosis was finally made; I had been living with undiagnosed active tuberculosis for 13 years. I commenced 9 months of treatment, but went into anaphylactic shock after just two weeks, which meant that I couldn’t continue with it.

Then in my third year of university a new combination of drugs were trialled and I began 18 months of life-saving chemotherapy treatment for multi-drug resistant tuberculosis – finally I had a result.

It must have been difficult to balance your treatment with finishing your degree, how did you manage that?

Quite honestly, Oxford life was a balancing act! Being there meant everything to me, and I valued my place so much that I fell over myself to do everything I could to stay. This meant being super organised with my workload and always being on top of it in case another health disaster was around the corner. This was Oxford, and although the University did put provisions in place to support me through my treatment, there was still an expectation that I met my deadlines and produced a high standard of work.

I did also have to choose carefully which socials I attended as I wasn’t in a position to do them all, but I still made lots of friends. Plus the great thing about the collegiate system is that everything is on site: much of my socialising revolved around college, and my college was right in the centre of Oxford too.

In the end my degree was also extended to four years instead of three which gave me the time to complete my degree whilst undergoing chemotherapy.

So what have you been working on since graduating?

When I graduated I was still on chemotherapy treatment and wasn't in a position to work. I asked myself what am I good at and what do I know about? Writing, and Oxford University. I knew that I would have benefited from an insight into student life and navigating the complex application process whilst I was applying to study. Under these challenging circumstances I had both earned a place and graduated from one of the top universities in the world: if I could do it, so could other young people with barriers to their education.

And so ‘That Oxford Girl’ was born. I launched the blog and Instagram profile in September 2016, providing a student perspective of the application process and life at Oxford University. What started off as a little blog and Instagram have now become a powerful free access resource, encouraging young people from all backgrounds to consider Oxford University as an option. Since the launch the blog has had over 350,000 views and the Instagram has over 25,000 followers. I also set up a student ambassador scheme last year and now have over 70 current students writing regularly for the blog. I never imagined just how much it would grow and the impact it would have.

I’ve had so many prospective students and followers contact me to tell me that the site has inspired them and given them the confidence to consider applying to Oxford. There’s nothing more rewarding than that.

What is it about Oxford that makes it special – why do you think so many young people aspire to study here?

The historic architecture, distinctive collegiate system, world-expert tutors, awe-inspiring libraries, quirky traditions and formal ceremonies make studying at Oxford a truly unique experience and one which stays with you for life.

If you could give one piece of advice to a prospective student, given your experience with That Oxford Girl, what would it be?

BELIEVE – if my Oxford journey taught me anything, it was that hard work, plus self-belief can go a really long way.

I never quite got over the fact that Oxford chose me, but it did and I flourished and it was the best experience of my life. Don’t be put off applying because you feel you don’t fit the ‘Oxford Type’ - I realised that Oxford University was for people like me, and it’s also for people like you.

I would love to make a career out of running That Oxford Girl but to be honest for now it’s a case of constantly pedalling to sustain it. The blog is currently solely funded through advertising but I am in desperate need of funding in order to keep it going. Up until now I’ve been working another job alongside it: it's now too valuable a resource to simply throw away.

So at the moment an average day for me is a bit of a juggling act; I jump from blogging, to photography, to school talks, to access events, collaborating with colleges and halls, student ambassador meetings, connecting with brands in the city and seeking sponsorship opportunities.

What are the best and worst things about That Oxford Girl?

The best thing has to be the messages I receive throughout the year from young people. So many pupils get in touch to say they would never have had the confidence to apply to Oxford University if they hadn’t come across That Oxford Girl, and that 100% makes all the hard work worth it.

The worst thing right now is the instability – I’m desperate to ensure I can financially keep That Oxford Girl going in order to keep increasing social mobility, widening access and participation to Oxford and raising aspirations.

Do you have any advice for aspiring bloggers in the alumni community?

Show a bit of you! Blogging is a personal way to connect with the masses; the tone of That Oxford Girl is personal, fun and light-hearted, connecting with young people in a language which isn’t intimidating, unlike many of the official documents out there which can be off-putting.

What’s your favourite spot in Oxford?

Are there any memories of being a student that stick with you?

My matriculation day will always stay with me; as I paraded through the streets in my sub-fusc and entered The Sheldonian Theatre, I couldn’t believe that me, little old me, had made it into this amazing institution.

You can find out more about That Oxford Girl via the blog and Instagram.