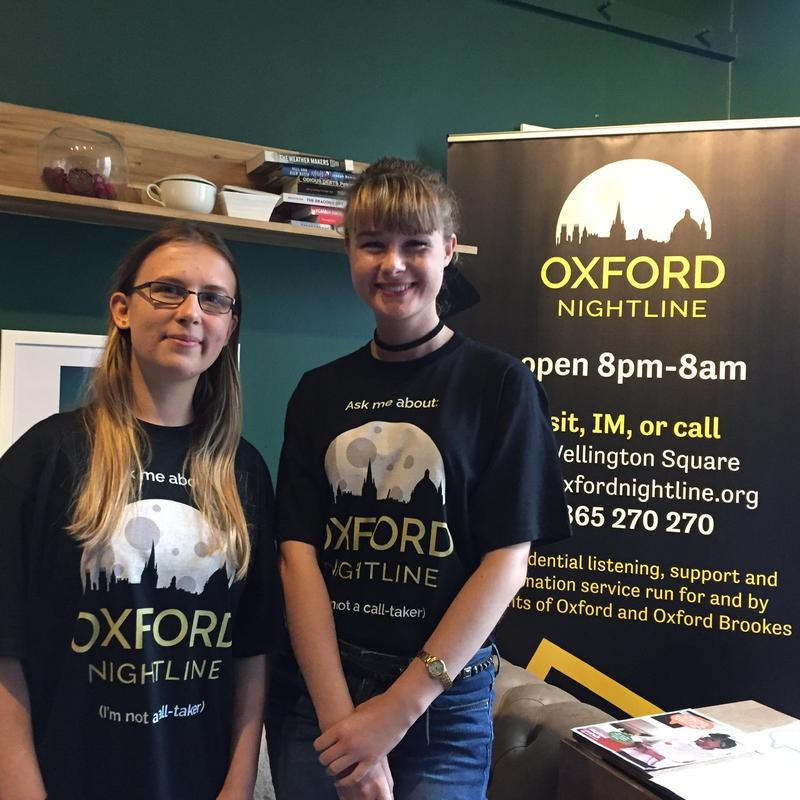 Oxford Nightline was founded in 1972 by Bridget Day, and celebrates its half-century birthday in April, a special conference taking place at St Hilda’s College on 30 April.

Volunteers remain anonymous so that the current leaders, two students called 'coordinators', are not named in this article. Rather, we have spoken to former volunteers such as Lily Furber (Mansfield, 2016), Colin Cook (Hertford, 1982) and Jason Holdcroft-Long (Magdalen, 2001), in a bid to get a feel for an organisation that for fifty years has offered a free service to all University students from 8pm until 8am, should they want a friendly voice for whatever reason.

If there was a single recent ‘moment’ that crystallises the importance of Nightline to the University, it came in 2018 when torrential rainfall flooded the basement premises.

‘… despite our best efforts with hairdryers and mops, it was not enough to keep two feet of water at bay and we had to close for three days. It was then I realised how much the university values Nightline as a service. Across the colleges, student base, and staff, the entire university ecosystem came together to support Nightline. Within three days, our coordinated efforts ensured the service was up and running again, in the midst of exam season.’

Lily Furber graduated in July 2020, right in the middle of the pandemic year, bringing Nightline into recent memory, but like some of the other voices for this piece, her broader perspective concerns just how important Nightline became to her.

‘I studied Physics and now work in the Civil Service and for other helpline and mental health support networks. Nightline first started my interest in public policy, and making changes in public health provisions… My involvement in Nightline was by far the most meaningful and rewarding part of my experience at Oxford.’

If you rewind the years to within a decade of Nightline starting, the sentiments and memories expressed by former volunteers are remarkably consistent.

Colin Cook (Hertford, 1982) was something of a natural, failing his Biochemistry Prelims because, he says, he became a one-man support service to many students in college, to the detriment of his own studies.

‘I passed a re-sit – but it was a salutary lesson!’

Back in the 1980s the service was at 8 Wellington Square, only later moving to a nearby address where it operates to this day, but no longer taking in-person visits.

Asked what he thinks has changed over the years, he says that imposter syndrome within Oxford is common and probably unchanging.

‘The tutorial system can be isolating; technology has changed and created or amplified problems to do with comparison or ‘FOMO’, ‘Fear of Missing Out.’ The pandemic has triggered an enormous amount of anxiety.’

However he also remembers that there was a broader culture within and around Nightline that was simply friendly and supportive in what otherwise could be a competitive atmosphere.

‘You don’t have to have a problem to call up or visit, and not everyone did. And that was fine too. In that sense we were an alternative means of association in Oxford.’

Some people met future life partners through happy coincidence as volunteers, while for others the broader experience of providing an important service was a vector for maturing and figuring out career paths too, with a great many of the volunteers later going into the caring sector broadly defined, including but not confined to medicine and healthcare.

Jason Holdcroft-Long (Magdalen, 2001) mentions the Samaritans, which was founded in 1953 by a vicar but was an entirely non-sectarian, non-denominational secular organisation – a standout feature that now seems like evidence of a flatter, less demarcated intellectual attitude consistent with the later twentieth century.

‘We use the term ’non-directive’ and also ‘non-judgmental,’ says Jason.

‘Oxford’s Nightline wasn’t the first. There was another one in Essex two years earlier. But we were fairly early. I later helped Northampton to set one up.’

Jason, who was reading for a degree in Modern History but went on to switch to medicine, fondly recalls doing one shift a week from the then basement flat in Wellington Square.

‘It was funny – my student room was in the Waynflete Building and it was noisy. The irony was that I sometimes slept better when on one of my shifts!’

Normal procedure was to have one female volunteer and one male, and for the night shift from midnight until 8am, beds were provided plus an amplified doorbell and phone lines, which were jokingly referred to as ‘nuclear’ when they went, so loud did they sound.

Just before the first shift began at 8pm, a Group Leader would open the premises.

Jason remembers trips across the road to the CO-OP on Walton Street to re-stock with tea and biscuits.

‘Nightline was the most important part of my student experience,’ Jason says. ‘I was fairly depressed myself during my first year and for some of my second. The people I met through Nightline and the overall experience was more important in the end than my actual degree, looking back at it.’

Back to now, or at least the recent, COVID now. Liz Ansell, who joined Oxford Nightline in Hilary 2006 and later used Nightline insights to train a whole organisation to listen on phones in the pandemic, speaks of the implications for mental health of what she refers to as ‘fingertip information on macro issues’ whether that’s the pandemic, climate change of now the war in Ukraine.

Her point is that there is too much incidental information rushing around social media, poorly organised and ungrounded; often unfounded.

‘…of course that is going to lead to more challenges with mental health.’

She thinks that in the past it was similar, but now it has become magnified by technology.

‘I think we were in a bubble, and some people in that bubble had some challenges, and we gave them a safe space to talk about them. I think that now probably the bubble is much bigger.’

Within the troubling implications of these issues, there is a deep love of Nightline.

Julia Florentine, volunteer from 2007 to 2009, later went on to become the coordinator at London Nightline for two years.

‘Just the 3am silliness that you get when you’re tired and stuck in a room with one or two other people, and all you have to do is talk to each other, so you make friends really quickly, and that was one of my favourite parts of it.’

In celebration of its 50th anniversary, Oxford Nightline will be hosting a conference and dinner at St Hilda's College on Saturday, 30 April 2022. The conference will include talks and panel discussions centred around the topics of mental health, listening, and Oxford Nightline's legacy. The dinner is open to all former volunteers and will be a great opportunity to catch up with fellow volunteers from the past.

For more information, please get in touch with the 50th anniversary planning committee at 50years@oxfordnightline.org. They would be delighted to hear from you!