“I used to cycle to work every day and had to shower,” is how Oliver (St John's, 2008 - pictured above) begins the story of his invention. “One day I arrived, and my manager had arrived on his bike in a suit. He showed me that he had one of the English-made Power Bikes, which are still around but they’re quite old-fashioned now. 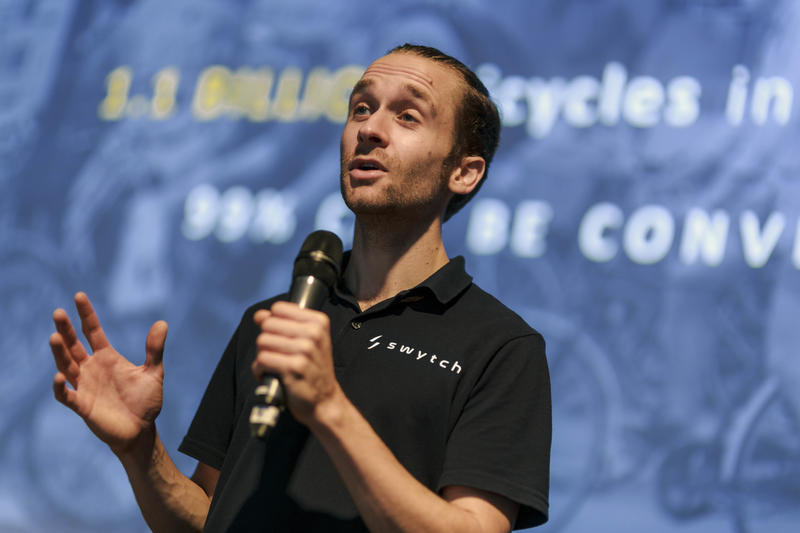 Once he had the bug, Oliver’s business grew from a sideline project into what is now his day job: “I started importing the e-bike kits at 10 or 20 at a time whilst I worked in London. I got to the point where my room was full of those kits, so I had to get a warehouse.” He built a website, hiring his sister to run the online shop whilst he worked, and then a point came in his career where he felt he was ready to quit the day job and go for it alone.

“So I quit and decided to focus on e-bike kits and see what I could do with it,” he continues. “That decision put me in the position of needing to make more money from my e-bike kits. This meant trying to source better quality kits, which ultimately meant making my own because the kind of product I was looking for to grow my sales, didn’t exist yet. What I needed was a single eBike conversion kit that would work on any bike and was simple to install… and that’s what the Swytch Kit is.

Back in 2012, Oliver graduated from the Department of Engineering Science at Oxford University, and headed off in a very different direction, training to be an accountant at PwC. It’s experience that has proven useful in running an up-and-coming tech company, but, he says: “As soon as I qualified I left there, because I decided that actually I missed engineering!”

He moved back into the field, but it was then that Oliver realised that he needed to be his own boss. “I got a bit fed up inventing technology as a consultant for other companies,” he laughs. “They were doing really stupid things with it, and I got a bit frustrated that I was so far from the commercial end.

“I helped to develop the touch screen for a smart-watch used in a waterpark for ride bookings and on-site payments. After we finished the product, the operator decided that they couldn’t be bothered to recharge the batteries every few months. So instead, they just turned off the touchscreen – I had developed this technology that would never be used!”

He’s now the CEO of a company that has raised over £1,000,000 in funding. But as a manager, Oliver continues to make use of his engineering expertise. “I use the problem-solving aspect of engineering the most,” he says. “I would say that once or twice a month I still sit down and do some product design, but I’ve mostly outsourced that now, so the actual work is done by other people – but I know whether they’ve done it right!”

He attributes his ability to provide oversight across the design process to his time studying Engineering Science here at Oxford. With our undergraduate course covering every branch of engineering, from Materials to Biomedical, he has gained a broad understanding of the topic. “My approach to engineering is very much as a generalist,” he says. “I get other people to do the nitty gritty, but I know enough about everything that I can be in charge of every aspect. I know enough about mechanical engineering that when we’re doing bike frame design, I know when it’s right – but someone else does the CAD.

“Having done all areas of engineering at Oxford, and having an overview of everything, I can basically do the design review for all aspects of our technology. I can tell when things are done right.”

And it’s not just knowledge that Oliver gained through his degree course – he has also benefited from an engineer’s mindset.  As he explains: “I think the success of the company is down to the fact that me and my co-founder have this optimism that we still cling on to (perhaps naively!) that we can work out how to do almost anything better than almost anyone else who has worked out how to do it.

“I think that stems from my engineering degree: you go to a lecture, you get told something that doesn’t make any sense, but you have to do a tutorial on it the next day. You have no idea exactly how you’re going to work out how to solve these problems. But you have confidence that somehow, one way or another, by tomorrow, you will have worked it out. And one way or another, you do.”

The company developed Oliver’s e-bike kit by tapping into the power of crowdfunding, appealing to cyclists inspired by their mission to make electric transport more affordable. “I’m very excited about the possibility of crowdfunding becoming more of a mainstream sales mechanism,” he says. “We’ve done it twice now, but I think the first time was the most nerve-wracking because it was completely unknown territory.”

That first round of crowdfunding was undertaken with the expensive assistance of a consultancy company based in California, which specialises in crowdfunding efforts of this kind. It’s something that Oliver describes as “necessary for getting over the initial barrier of ‘alright, how do we do this?’”

For their second round of funding, the company struck out on their own, with significantly better results. This gave Oliver a realisation: “I think if you’ve never worked with any experts at all, you tend to think ‘oh, I’m sure the experts would do it much better than this’. But knowing that even the experts didn’t do it this well, it gave us the confidence just to go ahead. The real experts in crowdfunding, you can’t hire them – because they’re too busy making their own money!”

So what does the future hold for Swytch Technology, and for Oliver himself? “At Swytch we do almost everything ourselves. We design the products ourselves, we manufacture them ourselves – we are the factory managers in China. We do distribution ourselves, we put things in containers; we do literally everything ourselves. But what we’re really good at is the front end, when we design a product and make a video and then sell it. So we’re focusing on doubling down on that area.

“We’re trying to build our level of ambition, but very much sticking to the crowdfunding model, because it will allow us to grow much faster,” he says. “One of our pipeline visions is to crowdfund an electric car, which until last month had never been done before. But then Elon Musk got there first with the Cyber Truck. Far from being discouraged that we were beaten to it, we are reassured that if we’re thinking along the same lines as Tesla’s senior strategists, we must be thinking along the right tracks to become a successful eVehicle company.

That’s a big ambition for a young company, and it’s sure to be a lot of work. But the experience of starting his own business has given Oliver the work ethic required: “It all happened really fast, to be honest; I think ultimately, it felt like a lot of stress! But it does motivate you to work hard. I was never very good at working hard in my previous jobs – I was very efficient, but I never really tried hard. I saved up all my energy for after work, when I ran my own online shop, which is what I really cared about.

“But now, having my own company, that success is mine to have, so I really make the extra effort. As an entrepreneur, you do have to. But it’s worth it, definitely.”

Oliver Montague graduated from Oxford University (Engineering Science) in 2012, before going on to study accountancy and, ultimately become Co-Founder and CEO of Swytch Technology, which produces kits to turn any standard bicycle into an electric bike. Oliver believes that his engineering background has been invaluable in the business world.

Article reproduced with kind permission of the Department of Engineering Science.