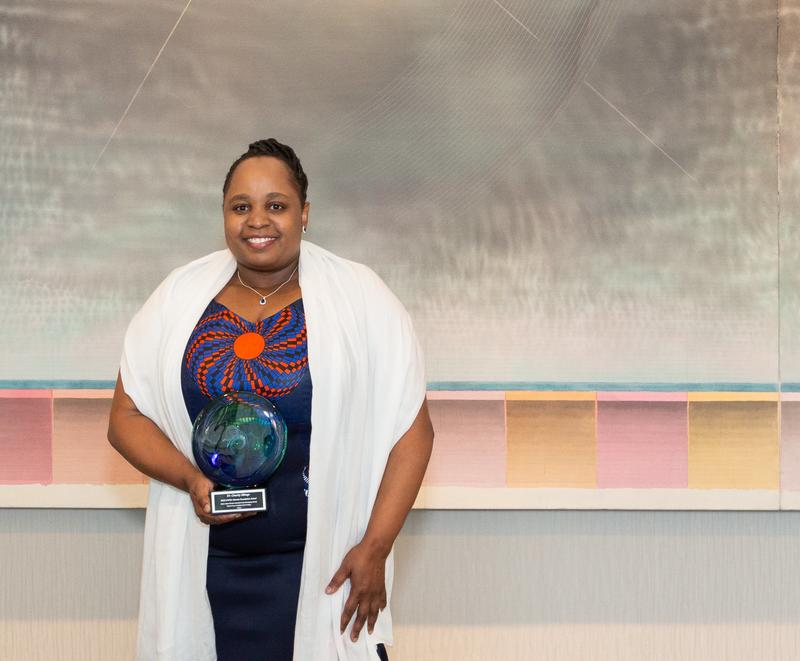 If reunited with her pre-university self or other high school students today, Dr Chao Mbogo says that her summary advice is: don’t get fixated on ‘I want to be X’. ‘There’s too much pressure to decide what you want to be too early. Take your time to discover the areas of real interest. They often come later and that was my experience.’

The first ever Kenyan to receive the prestigious OWSD-Elsevier Foundation Award earlier this year, Dr Mbogo, who is Dean of the School of Science and Technology at the Kenya Methodist University, has had an amazing career so far.

Besides her faculty position she is the Founder and Program Lead for KamiLimu, a student mentoring program that was began entirely informally three years ago.

‘I wanted to help a larger group of students with skill building that I had identified as lacking, partly through my own experiences. The name of the non-profit organisation is a play on Swahili words meaning ‘whole education.’

One of the skillsets students need is how to successfully apply for a scholarship. Dr Mbogo not only got into the Masters in Computer Science programme at Oxford but did so with a full scholarship through the Shell Centenary Foundation.

‘I sent out an email to a few students offering informal mentoring, but suddenly had forty students wanting help. It became a group situation and snowballed from there,’ she says.

She identifies five areas where students need to build competence outside the immediate curriculum of a degree–scholarship application skills; innovation, such as how to  identify a ‘good problem’ and design a user-centered solution through computer programming or other tech skills; professional development, such as interview skills and CVs; personal development, such building resilience and self-confidence, and maintaining mental health (more importance than ever in the COVID pandemic year she notes); and finally community engagement and giving back, whether locally or internationally.

Although for now within Kenya, Dr Mbogo says that with its own organisational structure and a committee, the work at KamiLimu is a life-long committment. ‘These skills are universally required yet often elusive in terms of formal education…’

It’s a long way away from a childhood in the south western Kenyan town of Migori, where Chao remembers having no access to computers while growing up. She did, however, have a huge love of mathematics and realised later that it could transfer to computer programming. She saw an advert for a degree programme in Maths and Computer Science at a Kenya Methodist University and her parents agreed to support her application. That’s where it all began.

Having smashed it all the way through university, then came the painful business of rejection from some universities for a Masters programme but not from Oxford, although there was a tangle over whether or not her application had been received (moral: ‘don’t hesitate to ask if in doubt…’).

After an algorithm-oriented interview test that Oxford’s Department of Computer Science requested, and some wait, Dr Mbogo remembers getting the acceptance email. ‘I just quickly checked my email before going out, and there it was… I was so thrilled I kept it to myself for a whole day, almost to check if it was still real – then I told everyone.’

St Catherine’s was a great experience although being mixed up with noisier undergraduates led to a relocation early on, while the early days were ‘a daze’ and being exposed to a mega-competitive environment having always been top of the class had the near-universal shock factor common to almost everyone (‘I was completely challenged – I had to re-learn all my expectations, but it was healthy.’)

After a hectic year resulting in her degree, Dr Mbogo was then able to work at Oxford University Press as a publications assistant, extending her thesis research into a second year working on software that could automate classroom scheduling within a complex university organisation. From there she moved to Cape Town for her PhD and subsequently to Kenya Methodist University as faculty.

Her other huge project in late 2020 concerns the total rewriting of an app that originated in her PhD research, that allows students with no access to a computer to learn computer programming using only a phone, a really complex nut to crack but one that is nearing completion. Dr Mbogo says that it’ll hopefully launch before the end of the year, and will be  accessible to the public and completely free to use.

Her receipt of the OWSD-Elsevier Foundation Award is, she recognises, one of the biggest things that has happened because it’s a hugely prestigious award and offers confirmation that what she’s doing is valuable and has recognition beyond Kenya.

Her total lack of exposure to a computer while at high school remains a huge problem in the developing world schools where the infrastructure and resources are lacking. By engaging the help of an User Interface Engineer and painstakingly rebuilding the app she believes it could unleash the creativity of a whole new generation of Kenyan programmers whose talents might otherwise be lost – and perhaps women especially.

She laughs with a wave of the hands – ‘I can’t tell you yet what the app is called! We haven’t named it yet but we will. The point now is to get it right. Then we’ll launch it!’

First awarded in 2013, the award Dr Mbogo won earlier this year is given in partnership by OWSD and the Elsevier Foundation. OWSD chairs a panel of distinguished scientists to select the winners, and the Elsevier Foundation supports a prize for each winner of USD $5,000 and an all-expenses-paid trip to attend the annual AAAS Meeting (American Association for the Advancement of Science), which took place in Seattle, February 12-16, 2020.